Cost refers to the expenditure incurred by a producer on factor input as well as on new factor input for a given output of a commodity.

Cost is always measured as opportunity cost because cost of producing a given amount of output is to be measured in terms of the sacrifices made in the producing that output.

It refers to expenditure incurred by the producer to promote sale of the commodity. For example, expenses on advertisement.

It refers to the expenditure incurred by a producer on the inputs for producing a given level of output.

Short run is a period of time during which some factors are fixed and some are variable. It has two components: fixed cost and variable cost.

It is the sum total of expenditure incurred by the producer on hiring/purchasing fixed factors of production. It is also known as indirect supplementary or overhead cost. TFV remains constant during short run. It does not change with increase or decrease in output.

It refers to the expenditure incurred by the producer on the variable factors of production. It changes with the change in the level of output. It is also known as prime cost or direct cost. As output increases, TVC increases & as the output decreases TVC decreases and when the output is zero, TVC is also zero.

Relationship Between TFC, TVC And TC

Average cost is the cost per unit of output product. It is also called unit cost of production. 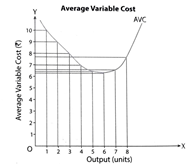 AFC curve is rectangular hyperbola. It we take any point on AFC curve and multiply AFC at that point corresponding level of output, the product (AFC×Q=TFC) shall always be the same.

AVC curve is U – shaped accordance with the law of variable proportions. It falls so long as returns to factors are increasing. AVC rises when returns to a factor starts decreasing.

Marginal cost is the addition to total cost when an additional unit of output is produced.

Relationship between AC and MC 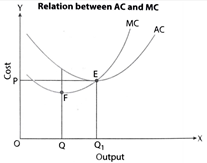 Relationship between TC/TVC and MC 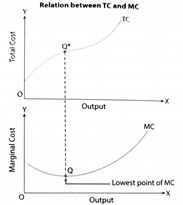 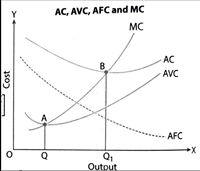 Do share this post if you liked Concept of cost Class 11. For more updates, keep logging on BrainyLads