There are four basic components that function as a unit. these include

A pond is a shallow water body in which all the above mentioned basic structural and functional components are present.
(b) Abiotic components are water with all the dissolved inorganic and organic materials and soil deposited at the bottom.
(c) Autotrophic components are phytoplanktons, some algae and the floating, submerged and marginal plants found at the edges.
(d) Consumers are zooplanktons, which are free swimming and bottom dwellers.
(e) Decomposers are the fungi, bacteria and flagellates found abundantly in the bottom.
(f) Functioning of pond ecosystem occurs in following steps:
* Autotrophs convert inorganic material into organic material with the help of solar energy.
* Heterotrophs consume autotrophs.
* Decomposers decompose dead organic materials and mineralise it to release them back for reuse by the autotrophs.
* The above events are repeated again and again.
Unidirectional movement of energy occur towards the higher trophic levels and lost in the form of heat to the environment.

Leaves partially consumed by decomposers such as fungi and bacteria.
They begin to lose form and become litter.
Diagrammatic representation of decomposition cycle in a terrestrial ecosystem
(iii) Decomposition rate depends on
(a) Oxygen availability
(b) Chemical composition of detritus
(c) Climatic factors
(d) Temperature and soil moisture
(iv) Decomposition rate is slower, if detritus is rich in lignin and chitin. It is quicker, if detritus is rich in nitrogen and water soluble substances like sugars.
(v) Warm and moist environment speeds up decomposition, whereas low temperature and anaerobiosis inhibits decomposition and causes the formation of organic materials.

The chemical energy of food is the main source of energy required by all living organisms. This energy is transmitted to different trophic levels along the food chain. This energy flow is based on two different laws of thermodynamics:

Sun is the only source of energy for all ecosystems on Earth and except for the deep sea hydro-thermal ecosystem.

Less than 50 per of incident solar radiation is photosynthetically active radiation (PAR).

Plants capture only 2-10 per cent of the PAR.

All organisms are dependent for their food on producers.

Flow of energy in the ecosystem is unidirectional.

The green plant in the ecosystem are called producers. Example-In a terrestrial ecosystem, major producers are herbaceous and woody plants and in aquatic ecosystem phytoplankton, algae and higher plants are producers.

All animals depend on plants for their food needs are called consumers.

Consumers which feed on the producers, they are called primary consumers or herbivores. Example- grass

The animals which eat the primary carnivores are called tertiary consumers or secondary carnivores. Example- man.

Based on the source of their nutrition or food, organisms occupy a specific place in the food chain that is known as their trophic level.

Food chain if is two types-

Food chain which starts from producers and ends on carnivores through herbivores is called grazing food chain.

Food chain which starts from dead organic matter and passes through detrivores to organisms feeding on detrivores is called detritus food chain.

Detrivores are decomposers which meet their energy and nutrient requirements by degrading dead organic matter or detritus, these are also known as saprotrophs.

The interconnected matrix of food chain is called food web. For example- specific herbivore of one food chain may serve as food of carnivores in another food chain.

Each trophic level has a certain mass of living material at a particular time called as the standing crop.

The standing crop is measured as the mass of living organisms (biomass) or the number in a unit area.

(a) Pyramid of numbers

(b) Pyramid of energy 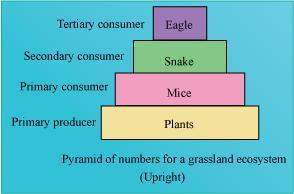 A pyramid of biomass is a graphical representation of the total amount of living matter present at each trophic level of an ecosystem. It can be upright or inverted. It is upright in grasslands and forest ecosystems as the amount of biomass present at the producer level is higher than at the top carnivore level. The pyramid of biomass is inverted in a pond ecosystem as the biomass of fishes far exceeds the biomass of zooplankton (upon which they feed). 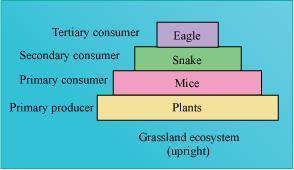 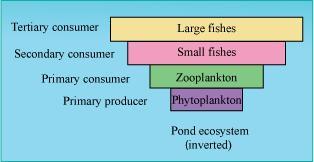 The gradual and fairly predictable change in the species composition of a given area is called ecological succession.

The changes lead finally to a community that is in near equilibrium with the environment and that is called a climax community.

During succession some species colonise an area and their populations become more numerous, whereas populations of other species decline and even disappear.

The entire sequence of communities that successively change in a given area are called sere(s).

Ecological succession is of two types-

Succession that starts in areas where all the living organisms somehow lost that existed there is called secondary succession.

Secondary succession can occur in abandoned farm lands, burned or cut forests, lands that have been flooded.

The cyclic movement of the nutrients between biotic and abiotic components of the ecosystem is called nutrient cycle.

The amount of nutrients present in the soil at any given time, is called as the standing state.

Nutrient cycles are of two types-

Gaseous cycle is the cycling of carbon, nitrogen etc.

Sedimentary cycle is the cycling of sulphur, phosphorous etc.

The reservoir for gaseous type of nutrient exists in the atmosphere and for the sedimentary cycle the reservoir is located in Earth’s crust.

Carbon constitutes of 49% of dry weight of organisms.

4×1013 kg of carbon is fixed in the biosphere by photosynthesis.

Large amount of carbon returned to the atmosphere as carbon di oxide through respiration of producers and consumers.

Some amount of carbon is lost to sediments and removed from circulation.

Rapid deforestation and massive burning of fossil fuel for energy and transport have significantly increased the rate of release of carbon dioxide into the atmosphere.

Many animals also need large quantities of this element to make shells, bones and teeth.

When rocks are weathered, minute amounts of these phosphates dissolve in soil solution and are absorbed by the roots of the plants.

Herbivores and other animals obtain phosphorous from plants.

The waste products and the dead organisms are decomposed by phosphate-solubilising bacteria releasing phosphorus.

Difference between carbon and phosphorous cycle

The products of ecosystem processes are named as ecosystem services.