Our Environment Class 10 Notes : Immediate surrounding where we live is called environment. It can also be referred as the combination of all the physical and biological conditions affecting the responses of living organisms. It basically consists of two components:

Biotic components:  It includes living organisms such as fungi, plants and animals.

Abiotic components: It include non-living surrounding such as air, water, temperature, sunlight and soil.

It  is simply the interaction of organisms with each other and with their physical environment.

Types of ecosystem are as follows:-

1.Natural ecosystem:  They are self-regulating ecosystem without any major interference by human being.

2.Artificial ecosystem They  are man-made ecosystem that are created and maintained by man such as Garden, Crop Field,  Aquarium and Park.

The two components of ecosystem are as follows:

Abiotic components: Components that consist of inorganic and organic substances and climatic factors such as soil, water, sunlight, temperature, pressure.

Biotic components: Components that consist of living organisms. These are further grouped into producers, consumers and decomposers.

1.Producers: Autotrophs are producers since they produce food. Example green plants, blue green algae. The basic role of producer is to trap solar energy and transform it into food. They also provide atmospheric oxygen to all the animals.

2.Consumers: They consume food prepared by the producers. They are heterotrophs. They are further classified into three categories as discussed below:

They keep a check on population of producers.

3.Decomposers – Microorganisms such as bacteria and fungi that break down the complex organic compounds from the bodies of dead plants and animals are simpler substances are known as decomposers.

It is the feeding interaction between organisms of different population in an ecosystem. It is simply a series of organisms in a community in which one organism consumes other organism in order to transfer food energy. It starts with producers.

It is assumed that more than four consumer in a food chain is unusual since beyond the third consumer level very less amount of energy is left to be transferred to the next trophic level.

In a food chain there is unidirectional flow from of energy from sun to producer and subsequently to series of different types of producers.

These are simply steps in a food chain at which energy transfer takes place from one organism to another. 10% of food taken by one trophic level is available for the next trophic level. 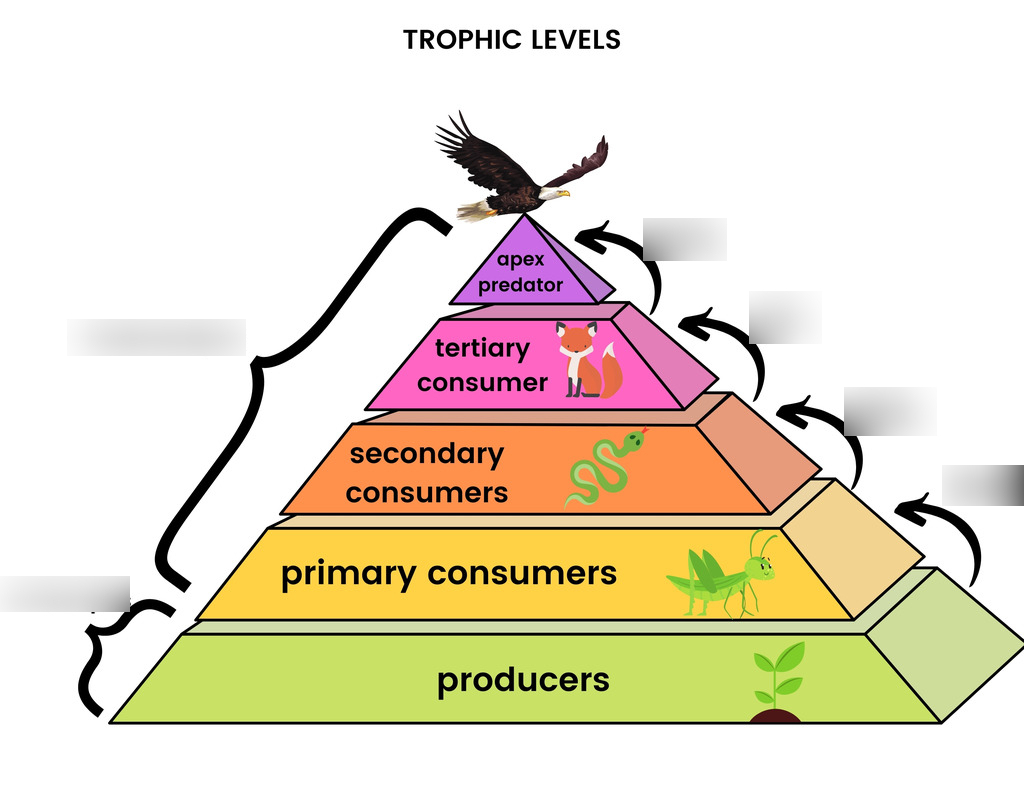 The network of several interconnected food chain is usually referred as food web. Food chain in an ecosystem do not operate in isolation and always occur in food web.

It was put forth by Lindeman
According to this law only 10% of the energy and bring a particular trophic level is available for the next trophic level.

It is so because most of the energy gets lost in the form of heat in the environment during the energy transfer.

Flow of Energy in an Ecosystem

Energy is required by each organism in order to carry on various activities and for building up and repairment of body tissues. The ultimate source of entire energy used by organisms is the sun.

The successive increase in the concentration of some chemicals through the various food levels of a food chain is termed as biomagnification.
The amount of toxic nonbiodegradable substances increases with successive trophic levels. Man being on the top in the food chain accumulates maximum concentration of toxic non biodegradable substances in the body.

The useless left over or discarded material generated in our daily life.
There are basically two types of waste as discussed below

It is a layer of Earth’s atmosphere where ozone is concentrated. It is present at a height of 15 km to 60 km in the upper atmosphere.
It is essential for the existence of life on earth since it absorbs most of the harmful ultraviolet radiations coming from the sun and prevent it from reaching the earth.
The thinning of the ozone layer is referred as ozone depletion.
It is being depleted by air pollutants.
Chlorofluorocarbons are the air pollutants that are mainly responsible for depletion of ozone layer in the stratosphere.
Besides methane and oxides of nitrogen also cause destruction of ozone.

Question 1: Why do we say that flow of energy through the food chain is unidirectional?

Question 2: It is generally observed the domestic wastes are decomposed in the bylanes of residential colonies. Suggest some suitable ways to make people realize that the improper disposal of waste is literally harmful to the environment.

Answer: When the domestic waste is decomposed by the action of microorganisms then it becomes the breathing place of flies and mosquitoes. Flies and mosquitoes are the carrier and vector of many dangerous diseases. Show some poster related to the spread of such disease can be pasted on the walls in public place in order to aware people.

Answer: As human being is at the last trophic level of its food chain. Does harmful chemicals enter into human body in the maximum quantity and does damage our internal body organs and causes many types of diseases in our body.

Question 4: What are the destructive effect caused by the chlorofluorocarbons in the atmosphere?

Answer: Chlorofluorocarbons deplete the ozone from the ozone shield that results in the increase in the passage of the harmful ultraviolet radiations to the earth.

Question 5: What are decomposers? What will be the consequence if there would be the absence of decomposers in the ecosystem?

Answer: Decomposers break down the complex organic substance of garbage, dead plants and animals into the simpler in organic substances that go into the soil and are used up again by the plants. In the absence of decomposers recycling of material in the biosphere will not take place.

Question 6: What would happen if all the organism at any particular trophic level are killed?

Answer: If we kill all the organisms in one trophic level then transfer of food energy to the next level will stop. Moreover there will be an overpopulation of individuals belonging to the previous trophic level. The organisms of the higher trophic level will also died due to lack of food. Hence it would directly result in imbalance in the ecosystem.

Do share this post if you liked Our Environment Class 10 Notes. For more updates, keep logging on BrainyLads.